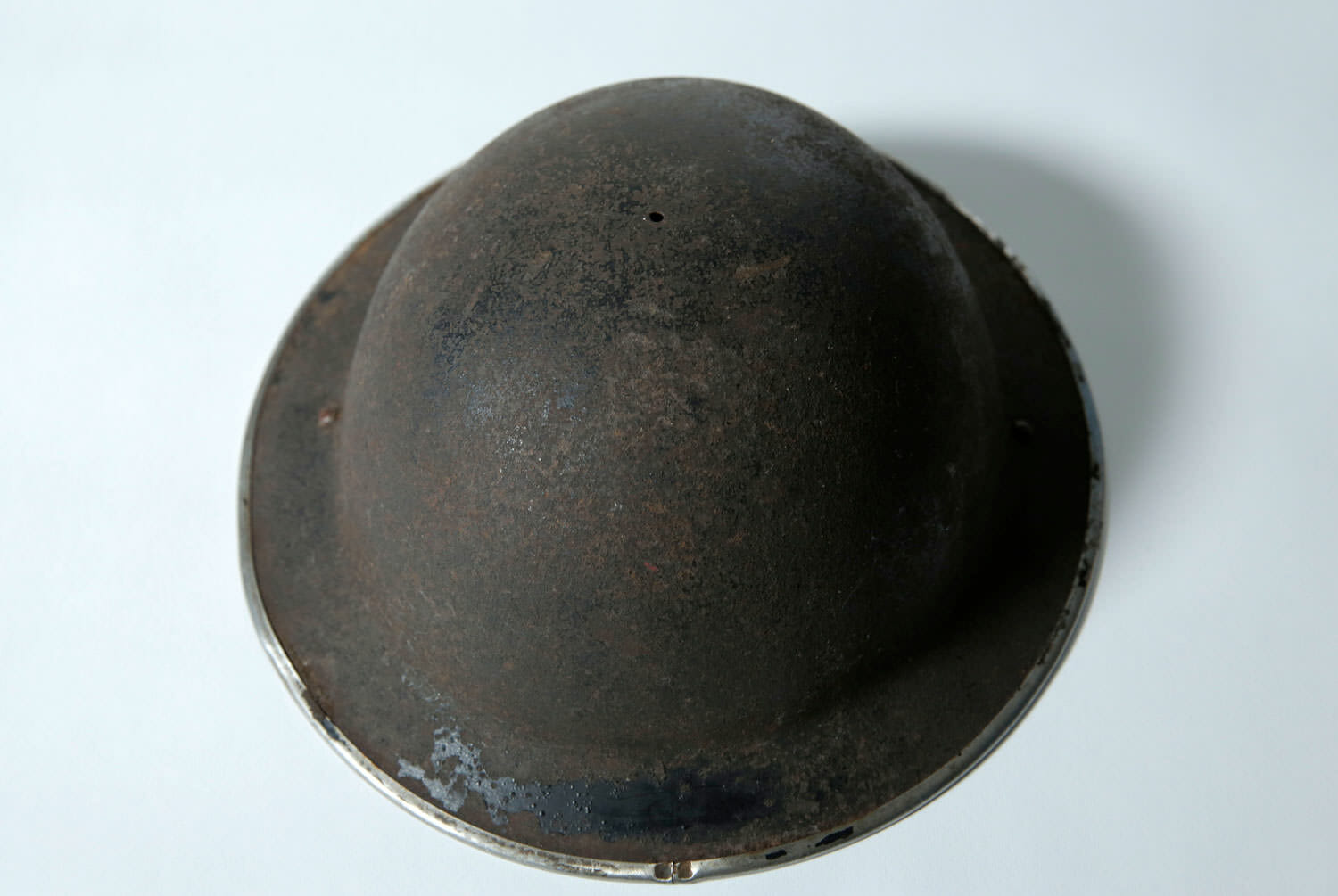 Steel British Army issue ‘Brodie’ helmet (named after its inventor, engineer John Leopold Brodie) which was used during World War 1 (1914-18). The helmet was secured using a leather chin strap. Originally a green colour, the helmets were padded on the inside, making them more comfortable to wear. Nicknamed the ‘Battle Bowler’ this helmet provided protection from ammunition or debris that fell into the trenches.

This particular helmet was used by a member of the ‘Black and Tans’ who were recruited by the British Government to support the Royal Irish Constabularly (RIC) in suppressing the republican movement in Ireland. The name ‘Black and Tans’ derived from the tan and black uniforms they wore. Between early 1920 and the Anglo-Irish Truce in July 1921, almost 14,000 ‘Black and Tan’ recruits, including many Great War veterans, served in Ireland where they earned a reputation for violence and brutality against the civilian population. They were disbanded in 1922 with the formation of the Irish Free State.

Important Notice: Galway City Museum will reopen its doors to the public on Tuesday 21 July at 10am. In accordance with current national policy on the containment of the Covid-19 virus we are putting in place new guidelines for the museum visit.  It will be imperative that the public revise these guidelines when planning their next visit so that we can manage the Covid-19 threat as much as possible.  More to follow soon on our new booking system. Keep an eye on this website or follow our social media channels for further updates.  If you have an urgent query contact the museum at +353(0)91 532460 or by emailing museum@galwaycity.ie.

We look forward to welcoming you back!
The Museum Team
PLAN A VISIT

Museum Information
This website uses cookies to improve your experience. We'll assume you're ok with this, but you can opt-out if you wish. Cookie settingsAcceptRead More

Any cookies that may not be particularly necessary for the website to function and is used specifically to collect user personal data via analytics, ads, other embedded contents are termed as non-necessary cookies. It is mandatory to procure user consent prior to running these cookies on your website.